Going through some of the previous questions asked on the forum, I have come across some issues when using sort queries.

Using the following data to help in reproducing.

I’d vote for nils to be removed when doing sorts. However, there might be a reason we kept them. Perhaps, see how SQL deals with nils when sorting, are those rows returned or not returned.

Actually I think none of the SQL based DBs seem to drop the data. Reference. 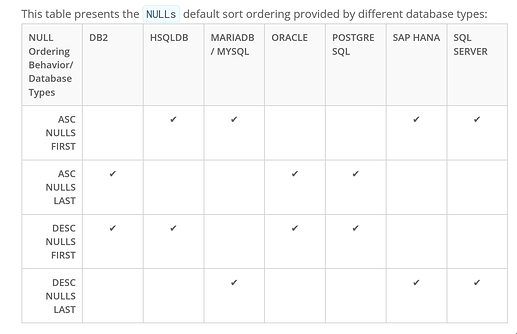 Query output is dependent on whether the predicate is indexed or not. I feel it should be identical.

Yes, I agree it should be identical. We supported it for sortWithoutIndex because that is the behaviour that SQL has. I’d say we should have the same behaviour for sortWithIndex as well though we’ll have to look into how easy/hard it is to do that.

Should we support appending nodes with nil predicates in case of sorting using variables?

I think we should do this as well. As a user, if I started with an initial set of nodes, I would expect to get back all those nodes even if some of them don’t have the predicate that I am sorting by.

Continuing the discussion from Identical query execution has inconsistent response:

it seems that it is dgraph’s behavior to filter out items that not posses the predicate you sorting on.

This does not seem like the right behaviour! No other database does this that I know of. I am familiar with SQL and MySQL so from that realm, if I sort based on nullish field in a column it will put the nullish order on top. This can be controlled with using CASE in the ORDER BY clause to move the nullish values to the end of the order though.

Possible to use SQL to sort by date but put null dates at the back of the results set?

Dgraph should have some kind of equivalent sorting of missing/nullish predicates. I understand that null predicates in Dgraph === missing predicates, which is not exactly the case in RDBs

Setting null value on predicate, and how has(predicate) and orderasc/desc or filter will effect results? Users

hi, i found in doc that if a field is set to null, its as like deleted the predicate from that object. for example updated_at = null if i were to sort a list of objects by updated_at, will it return records with updated_at set to null? if it does not return those records, means i have to set it to something that means empty right? if yes, what are the default values for null for all different data type of dgraph? int = 0? dateTime = ? string = “” ? float = 0.0 ? bool = false ? no null…

Is this topic still being discussed? I recently stumbled upon this issue, too.

Is there any recommended workaround by Dgraph team (a.k.a. @core-devs) to resolve nodes with nil value being omitted? I’ve read the second point in summary of the first post (see below), but I’m confused how the equivalent query in DQL should be written (or whether DQL supports it in the first place).

If you want nodes which point to nodes with nil values to be included, it is not supported right now, though the fix looks easy. See here .

It’s being discussed, in multiple different threads (like this one Inconsistent response of sort as a result of indexing of a predicate)

This is the master thread.

@vvbalaji @LGalatin I feel we should prioritize this and reach on a consensus.

I think we all agree that the result should not be dependent on whether the predicates are indexed or not.
On the second question, we can follow what the major SQL DBs do and not omit the nil values.

Agree, we should log these as two separate bugs in Dgraph and prioritize fixing them.

Just ran into this again today. I have a GraphQL query that sorts by a field that could be null. And what do you know I get an empty response and thought that my mutation was failing to insert, but it circled back to this bug with sorting on nil removing those nodes. Very frustrating! Hoping for a patch fix on this soon. Looks like one might be in the works as I speak: https://github.com/dgraph-io/dgraph/commits/ahsan/sort-bug ?

Yes, a fix for this is being worked upon. We plan to make sort queries also return nodes for whom the name predicate is null.

In case of ascending sort, the nodes with name predicate as null would be appended at the end. While in case of descending, the null values would come at the beginning.

After a discussion, we decided to put nulls at the end of the results, irrespective of their sort, so we can be consistent across indexed and non-indexed sorts.

Tagging @docs team to help us mention this behavior explicitly in our documentation.

@core-devs Any update for this case? I’m still stumbled upon this issue while using docker “dgraph:latest” image. And the docs still not mention any thing about this.

The docs should have been merged: docs (sort): Add notes about null values on sort queries by bucanero · Pull Request #63 · dgraph-io/dgraph-docs · GitHub

@damian could you double check?

you can find the updated docs here: https://dgraph.io/docs/master/query-language/sorting/

I think the docs should update Note on this page too, because I was searching for information about this when trying with GraphQL query: https://dgraph.io/docs/master/graphql/queries/order-page/

And could you please remind your team to update docker :latest tag to the correct latest stable v20.11.2 , it still stay in v20.11.0 which still has this bug.