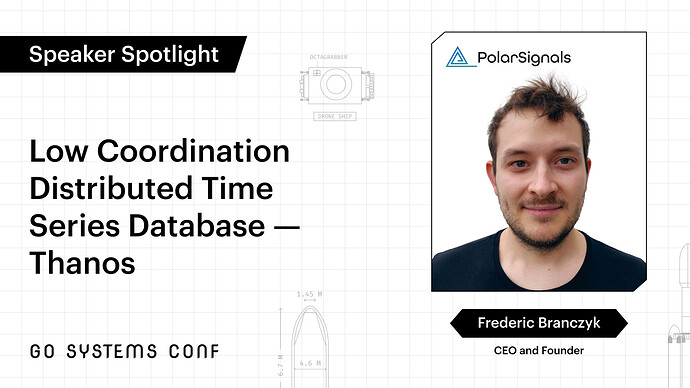 Distributed systems are hard, and we should avoid them at any cost. Arguably Prometheus’ success can in part be linked to its dead simple operational model: a single monolithic binary and everything is in-process, not distributed, and it has its purpose-built local time-series database. While a single Prometheus server can get an organization very far, at scale it is inevitable that Prometheus will need to be scaled out. Thanos is a project that aims to solve the pains of scaling Prometheus. In this talk Frederic will demonstrate how Thanos achieves sane operational complexity by employing distributed systems techniques that minimize the need for coordination.

Frederic is the founder and CEO of Polar Signals. Before founding Polar Signals he was a senior principal engineer and the main architect for all things observability at Red Hat, which he joined through the CoreOS acquisition. Frederic is a Prometheus and Thanos maintainer as well as the tech lead for the special interest group for instrumentation in Kubernetes. In a previous life, he was a security researcher working on key management solutions as well as intrusion detection systems. When not working on software, Frederic enjoys obsessing over brewing a perfect cup of coffee.

Have questions for Frederic?

Please submit them in this thread. Frederic would love to answer them!

Haven’t signed up for the free conference yet?