GraphSchema : A tool to spin up a GraphQL API with a Dgraph backend database

GraphQL API and Dgraph database, together at last

I’m building a tool for managing graph database schemas. Part of that is the ability to spin up a GraphQL API with a Dgraph backend - just from the GraphQL schema. GraphSchema does all the work of going from GraphQL endpoint to Dgraph query and back out again, so no code required to get a GraphQL endpoint.

Hope you have a look and like the ideas. There’s what’s in the video, plus lots more development happening at the moment. I’m sure you’ll pick some rough edges in there and features you’d like to see.

I’m expecting to have a demo out in Jan next year.

Looking forward to your comments!

Your tools seems work great, as I looking for similar tool, I wonder what technique you use for query transformation ? I thinking about this flow

And a bit question about decision to make arbitrary DGraph functions strings injectable to GraphQL query (Video #2 - time 4:37) , which I think dangerous if client can do that.

and last, what language you use for this tools, and is there any code you could share ?

Thanks for your interest!

Yes, the general approach I use is to parse the GraphQL and walk it’s syntax tree building up GraphQL± as I go. There’s also a bunch of checking off against the original GraphQL schema and inserting extra bits in the query based on both the schema and the query.

It’s a C# .net core app, so it runs on anything; and cause it’s stateless itself, it’s easy to spin up and scale in containers.

I agree that if you exposed the ability to inject arbitrary query right through to the backend that would expose quite some power to a client. But I wouldn’t do that. Think of GraphSchema as something like an ORM. An ORM, or other database mapping tool, gives you a mapping around your database that gives you a friendly API to work with as a programmer, but you wouldn’t expose that directly to a client, you’d build on top of it and expose that as a REST/GraphQL API that protects your data layer and enforces business logic etc.

GraphSchema is the same: it spins up a data layer for you and exposes it as a friendly API - you expose an API on top of it to your clients. If you know GraphQL well, think of GraphSchema as spinning up data microservices for you from schema definitions and you’d do schema-stitching, authentication, business logic, rate limiting, etc on top of that.

Hope I made sense there

Thanks for your explanation. I think I get your idea on how to query transformation done.
It seem you have a nice project, good luck with your project

Hey Michael, great work, I would like to contribute on the project / help you as much as possible.
I need a tool like this for the project I am working on.

Thanks for the interest. I slowed down a bit with holidays over Christmas, but back on track now. I’m expecting to have a solid demo version released this month sometime. I’m also putting together a cloud hosted option. If you’d like to be an early adopter of either of those when they are ready, I would would value some users and feedback.

In the first video, the addPost mutation returns an array on the author field: 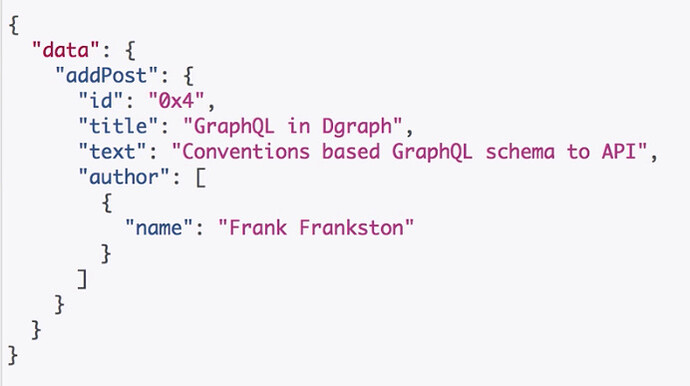 According to the schema, it should be a single object: 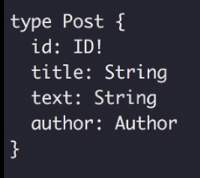 Is there a reason behind that?

That’s a known issue. It’s because Dgraph by default returns all predicates as lists. I chose not to correct it yet because of this open Dgraph issue https://github.com/dgraph-io/dgraph/issues/2511. If that gets done, I think I’ll be able to support it with no work in GraphSchema, otherwise GraphSchema will have to do it.

At this point I just chose to wait and see what happens with that issue which is currently has a Jan eta on it.

Great! Looking forward to the demo.

One more question - will it be possible to use GraphSchema as an ORM-like module within my own API, or will it only be a server that stands in front of the database?

I would love to be an early adopter, and I am available to help you in any way possible in order to make it work the way you envision it.
I have experience in kubernetes and distributed systems in general if you need my help in the cloud hosted solution.

Here is my github

I’m building an API using it right now and I chose to do more like you are describing. I wrapped calls to the backend GraphSchema service in something that looks like an ORM with a simple query interface, so I can access the underlying services and object model easily. But it’s far from perfect.

Things like ORMs don’t really seem to be quite built out yet for GraphQL or graph databases in general. That’s some of the tooling that would be great. It’s the kind of thing that’s language specific so I imagine that tool kits to work with a backend GraphQL store through an ORM-like model will get built for various languages and that would be something to use on top of GraphSchema or any other GraphQL endpoint.

Hey Michael, is there a way I can get in contact with you privately?

Very interested in this. Is there a repo I can check out @michaelcompton?

Hi, thanks for the interest. There’s nothing public yet. I’m just adding some features and test infrastructure and there’ll be something available in the next week or two.

Great. Can you keep me in the loop, please? josh@hoppie.co

It looks easy enough to clone this repo, and add dgraph schema code instead? 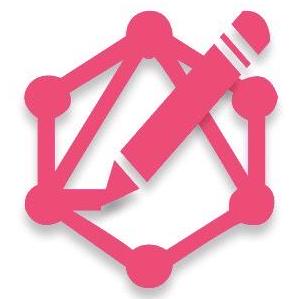 A developer web-app tool to rapidly prototype a full stack implementation of GraphQL with React.

There’s an alpha version of GraphSchema that you can use and find more info about here : https://github.com/MichaelJCompton/GraphSchemaTools. The wiki tab on that repo has the start of some docs about how to use it.

It’s early stages and not broadly tested in lots of environments yet. I welcome your feedback.

Thank you to everyone who’s liked the original post and posted comments.

I’m intending to keep building out the tool and the testing infrastructure. I’m also thinking of offering a hosted service - e.g. you bring along just a schema file and the service manages all the infrastructure, replication, backups etc. That’ll also include the ability to host Dgraph instances as well. (should be an early access version, end of March(-ish) timeframe, I’ll let you know when you can reach out if you’d like to be given access to that).